Playita Tours, an entrepreneurship for Venezuela

Playita Tours, an entrepreneurship for Venezuela 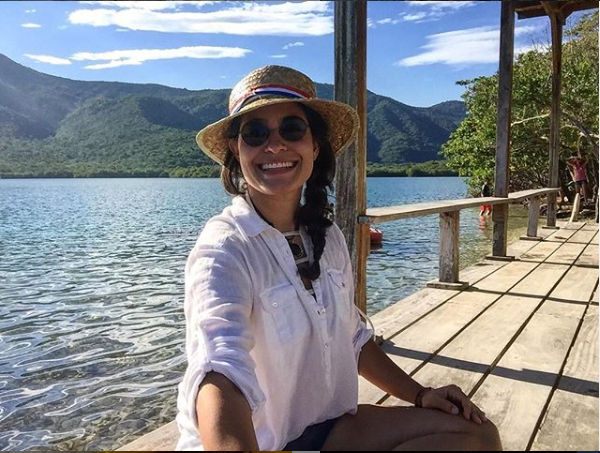 Playita tours is a project developed by our scholarship Anabella García, that was born in September 2018 and rescues tourism in Venezuela as a way to know our culture and value our history.

Anabella, student of the 4th year of Production Engineering at UniMet, loves the culture of our country, and she always has liked to travel and know what is behind each remote place in our territory. From this passion, Playita Tours is born, a tourism enterprise that has given her a reason to stay in Venezuela and show the importance of tourism as an element for the sustainable development of the country.

Opportunities in the middle of the crisis

It may sound cliché, but Anabella is one of those Venezuelans who has found a great opportunity in the midst of the situation in the country. With a worried face, our scholar remembers that one of the motivations she had to start with the project was the experience of wanting to travel around Venezuela and not finding the ways or the offers to do so. “I found many limitations: transportation, lack of cash, lack of fulldays, insecurity in the stations (…) I thought then, as I was in that situation, many Venezuelans were”.

Anabella noticed that the country’s economic situation has caused the Venezuelan not to recreate as before. “Hyperinflation has forced us to go and buy a pizza with the money we have but then does nothing else, the Venezuelan can know our country,” says this entrepreneur in an altered way.

The objective of Playita Tours is gives people the opportutnity to know the tourist places in their country. “There is a need to know what is ours, so I created a space in which it can be done”.

An ecological experience with culture and history

Playita Tours is an ecotourism company, that is to say, with conscience. It is also a closer experience to the people. “It’s not that we take you to the beach, you bathe, and you come back, not to say, how beautiful the landscape! but that you also live with the people of the area, who are genuine, kind, that’s a way to bridge the gaps between each other, is to make them closer, is to return and say how beautiful the place and how beautiful the people who served me there, that’s what our project is all about.


“There is a need to know what is ours, so I created a space in which it can be done”.

This next Production Engineer is considered herself  hippie, because she cares a lot about the environment. “A plastic container takes 200 years to decompose, and people don’t know that, so I decided to use my company to transmit an ecological message with a greater impact. There are things that shouldn’t be done, starfish shouldn’t be touched or taken out of the water to be photographed, for example, and people tend to do it.

Tourism in Venezuela is more than Los Roques or La Tortuga, it is more than the crystal-clear beach, tourism is going to a place that is perhaps an hour from your home and is just the same.

Beyond 50 things you can’t stop doing in Caracas

In August 2016, Anabella began to impact all its followers through a project called #50coscosasthatcannotleavetodoinccs spreading through its social networks a series of visits to emblematic places of the capital city, activity in which she showed customs, cultures, religions. It was an avant-garde proposal for being in Social Networks, which his friends and followers appreciated very much.

Through photos and videos, our scholar took her followers on the networks to places like Plaza Bolívar de El Centro, El Edificio Altamira, La Catedral de Caracas, Expanzoo, El Parque Los Chorros; all with a bit of their history and culture in the lines that Anabella dedicated to each post.

Two years later, that became Playita tours. Now she take people to know the places, literally. Playita is a series of fullday trips and is the beginning of a project that wants to become a travel option for Venezuelans who want to recreate and get to know the country.

One of the great challenges of undertaking in Venezuela is to go against inflation, “that’s what mainly worries me,” says Anabella. In Playita you work as a team with the transportation company, with the hostels, with the restaurants; that means that the prices vary a lot depending on the services they are going to offer, for example, if the fullday is with a stay, the price is a little higher,

In Playita we work as a team with the transportation company, with the inns, with the restaurants; that means that the prices vary a lot depending on the services they are going to offer, for example, if the fullday is with stay, the price is a little higher, however, “we are focused on giving the customer the opportunity to know the country without having to ask in foreign currency because the average Venezuelan does not earn in dollars,” says our scholarship holder.

– Venezuela has the serious problem of being a mono-producing and mono-dependent country dependent on oil and we have to understand that there are other things, tourism is one of them. I believe that tourism is a fundamental element for sustainable development, and this also helps to foment the Venezuelan’s attachment to the country.

There are many people who are emigrating, and Playita wants to tell them that if they leave, get to know their country and save the best memories, and to those who stay, then, tell them that beyond the problems, we have a wonderful country with spectacular places that many people do not know and that is incredible.

In addition, it is a way to create a win-win relationship to people who are in the country side, working with very few resources, get benefit from domestic tourists. I created a space for that.

-What is the most difficult thing?

-To fight against inflation.

-A project with a future?

-It is very possible that the project will change, because realities change and so do needs. Maybe we’ll go from fulldays to excursions, but I don’t know, this can be transformed.

-Are you going to leave the country or staying?

-I don’t know (laughs) because Playita appeared and now I don’t know. My plans are to graduate and work to gain experience, but everything changes, we don’t know what can happen in a year. Maybe I can go and leave someone to work on the project. But Playita was born to show that everything that’s here is ours and it’s not just going to end like that.