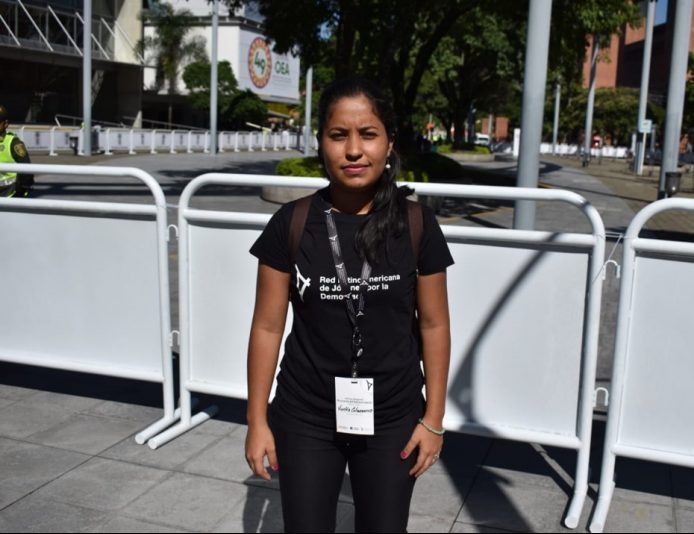 Youth leadership has become an important factor in facing the challenges presented by Venezuela in recent times. Young people are taking on more and more important challenges that form them and prepare them for the construction of a new country. In each experience, they contribute with their knowledge, but they also learn new things.

In recent years, our scholars have represented Venezuela in important scenarios for leadership, debate, critical thinking, active citizenship, and a myriad of necessary skills and capacities that are extremely important in the current situation of the country and the world.

Vianka Colmenarez, studying International Affairs at the UCV, is an example of this youth leadership in Venezuela. Our scholar was invited to the 7th Regional Forum on Youth and Democracy of the Latin American Network of Youth for Democracy in the context of the OAS General Assembly, held in Medellín, Colombia, from June 24 to 28.  During this meeting, the participants received training in Democracy, Human Rights, Rule of Law and Political Education by the German Foundation Konrad Adenauer Stiftung, an institution “committed to peace, freedom and justice through political education, both nationally and internationally”.

In addition to this activity, in August of this year, she was selected to be part of the delegation of young Latin Americans attending the first WomenEconomicForum in Latin America, held in Cartagena, in the context of SDG number 5: Gender Equality and Women’s Empowerment.

During this trip, she also participated in the Andean Youth Encounter held on July 31st. This activity allows the development of a shared debate in working groups, from which a document arises that contemplates the Andean youth agenda based on SDGs 5, 8 and 16 (Gender Equality, Decent Work and Economic Growth, Peace, Justice and Strong Institutions) and its relationship with the Ibero-American Youth Pact.

The project developed by Vianka and her team at this meeting was about SDG 5, focused on women, an element of economic development for the region. Its objective was to influence access to equal salaries and jobs for women, through the creation of mentoring policies, for the participation of women in the boards of directors of different organizations. This project was the winner, so the team will receive advice for its development and establishment of alliances.

Vianka, has demonstrated its competence as a leader in all the spaces in which it participates. Recently, she passed to the third and last phase of training of the Lidera Programme of the Futuro Presente Foundation, an organisation in which she is developing the Baruta participates and advances project, a public policy aimed at the development of elements of open government, in which the participation and collaboration of the community with the mayor of the municipality of Baruta is highlighted.

This project aims to train public officials in participatory processes that improve communication between the community and the mayor’s office, for which they established an alliance with the NGO Transparencia Venezuela and the Community Service Program of the Simón Bolívar University.

Currently, Vianka is participating in the Shared Commitment NGO Citizenship Creations project, in partnership with URIJI JAMI and the NGO La Bastilla. Through this initiative, a cycle of training workshops in cinematography, moral values, public policies, human rights, entrepreneurship, language and intelligent cities will be given to young people between 14 and 26 years old, residents of Brisas de Propatria and San Blas in Petare, two of the most vulnerable areas of the capital region.

A Scholar of Excellency

Vianka represents ProExcellency very well, she was one of the coordinators of AVAAMUN: the Model United Nations of AVAA developed in alliance with the Embassy of the United States in Venezuela.

Stories like Vianka’s are an example of Venezuelan youth who are committed to their future and the construction of a better country.